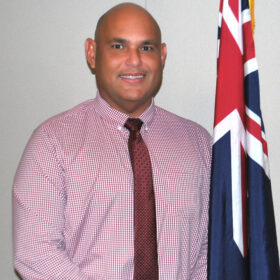 Tristan Hydes is a Deputy Chief Officer in the Ministry of Commerce, Planning and Infrastructure. Mr. Hydes began his career in architecture at local company, Chalmers Gibbs and Associates Limited. He studied briefly in California, before completing a Bachelor’s degree in Architecture at the University of Tennessee in Knoxville, United States

Upon his return to the Cayman Islands, Mr. Hydes joined the Public Works Department where he served as Architect and Project Manager, leading on a number of Government projects. He also played an integral role in the Island’s rebuilding efforts following Hurricanes Ivan and Paloma before joining the Public Works team for the Government office accommodation project.

As Deputy Chief Officer, Mr. Hydes is responsible for coordinating and developing the Ministry’s policy for planning and infrastructure. He also oversees several portfolio areas and ministerial projects including the Department of Vehicle and Driver’s Licensing, Department of Planning, National Roads Authority, National Energy Policy and the George Town Revitalisation Initiative.

Mr. Hydes serves as a Ministry’s representative on the board of the National Roads Authority.

Building a Green Economy: Can a focus on clean energy and sustainable development provide economic growth in the Cayman Islands?